History of the Club

Shoreham Bowling club was founded in 1933 when Councillor Mr W. Packer gathered a group of people together at Shoreham Town Hall on 28th April 1933 and decided that Shoreham were to have their own bowls club.

Councillor W. Packer informed the committee that the council would provide Woods, Mats, Slips, Number Pegs, String, etc.. for the use of the club. Club subscription would be 15/- per season and that the club dress would be Blue Blazer and Grey Flannels.

On 13th May 1933 the bowls green was officially opened with Shoreham playing their first ever game on that day against Preston Bowls Club, the result unknown.

On the 17th April 1936 the club made the founders of the club, Councillor W. Packer, A. Miller and C.E. Peak Hon: Life Vice Presidents.

The start of the Second World War had no effect on the bowls seasons and the club continued to fulfil fixtures throughout, the first in house competition to take place was the handicap singles.

In the 50’s Shoreham used to have an end of match roll up called penny on the jack where money received at the end of the season was presented to the League of Friends of Southlands Hospital.

3rd May 1956 the tenants of the café decided they were no longer going to provide teas for the clubs matches, so the wife’s of the players took it over.

In 1960 the Club decided to introduce Club ties for the players to wear.

In 1964 Fred Avenell was the first Shoreham player to gain his county badge and was also selected for the Middleton cup team on 3 occasions, the following year Fred was also the first player to be invited for International Indoor Trials.

In 1966 Fred became the 1st member of the club to play in national comps and also be a member of the ‘Denny Cup’ rink which won the Indoor Bowls Trophy, he was also involved in the First Shoreham team to win a Sussex Competition as in 1967 Shoreham won the Sussex County Fours.

In 1968 the opening game of the season became the annual match between the Captain of the Club and the President of the club it was later changed to a different date but it still takes place to this day.

On the 19th May 1980 the club received planning permission to build a clubhouse which was done and completed in 1981.

In 2007 the club continued to expand the club as they added a toilet block to the side of the club house, then in 2011 the club extended the other side of the club house by adding changing rooms, these were opened by Councillor Debbie Kennard who continues to this day to open the outdoor season by bowling the first wood.

Shoreham had two successful years between 2009 & 2010 as the Men won the Adur Top Team in 2009 and then won Division 4 of the Brighton and Hove District League in 2010 and got promoted to Division 3 where they still are today.

In 2011 the club had their most successful season in the Stracey League as they finished runners-up a feat they still haven’t managed to beat to this day.

On 3rd September 2012 the Sussex County team came to town and took on Shoreham in a match that was used to help celebrate Fred Avenell’s 100th Birthday as he was a huge success for both teams.

Shoreham’s ‘B’ Team won Division 6 of the Brighton and Hove District League in 2013 but only spent one season in Division 5 as the club struggled with numbers leaving them with no choice but to drop the ‘B’ team from the league and only have one team competing in future.

In 2015 the club appointed its First ever lady President as Mary Turnidge took over the reins from David Cutts. Shoreham also managed to win promotion to the Second Division in this year in the Brighton and Hove District League. Shoreham clinched promotion in the last game of the season as they beat Holingbury Park 'B' 8-2 and Mackie 'B' went down 8-2 to already relegated Preston 'B'.

In the winter of 2015/16 the Committee decided to look into having a canopy built on the front of the clubhouse,this was achieved with the help from club members,and former members and MWP Carpentry of Shoreham, thus enhancing the viewing area in front of the clubhouse. At the October AGM President Mary Turnidge stepped down and John McMurran former Club Captain took over,the club also voted to go to all mixed matches,were compition rules allow,from 2017.

Season 2017 Shoreham reached the Semi-Finals of the Edward Roland losing to Henfield BC, by one shot and who went onto win the final. The club also gained funding from WSCC's Community Initiative programe of £3500, to extened the clubhouse and join up to the changing rooms.

In the winter of 2017/18 the work to the clubhouse was completed which gave us more elbow room and greater security to the Changing Rooms. Season 2018 Shoreham had success in winning the Adur Top Team, coming runners-up in the Bill Hawkins to Southwick Park and also going one better in the Edward Roland reaching the Final and beating Horsham BC, the winning team of David Goodman,Dave Page, Mike Redford and skip Jamie Dunk. 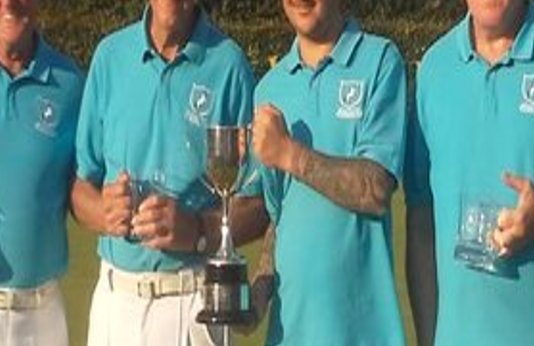 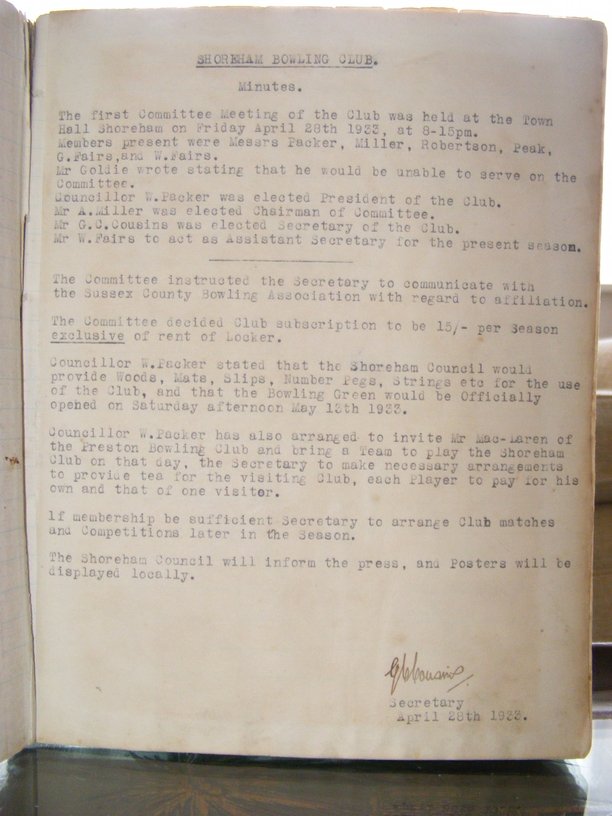